Need to lock up the fridge? Handcuffs are an easy solution if you have a refrigerator with French doors like the one pictured. These refrigerator handcuffs are Smith & Wesson Model 100 Weather Shield Red. 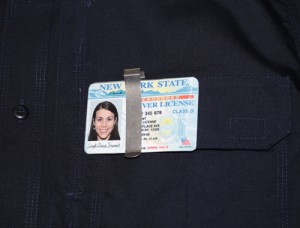 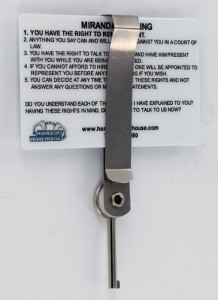 ASP has redesigned the ASP 56225 Scarab disposable restraint cutter. The new restraint cutter opens and closes in a clever way that keeps it compact, but easy-to-use. A hole at bottom and included keyring allow you to attach to vest, jacket, pack, etc. You can tell the new one by the word scarab printed on it. Available at Handcuff Warehouse: ASP Scarab Cutter.

We stock wrist and ankle protectors from Humane Restraint. The neoprene sleeves velcro around wrists or ankles. Protects skin from damage and irritation from steel restraints. The challenge is to make the protector thin enough so the handcuffs or leg irons still fit over the wrist or ankle while still providing enough cushioning to make a difference. This product does a good job and has become popular since we started offering them. These are much more popular in the UK where officers often handcuff themselves to prisoners they are escorting. That is generally not done in the USA as it is considered unsafe for the escorting officer. It is useful for elderly people with fragile skin and other special situations. Available at Handcuff Warehouse: Humane Restraint Neoprene Wrist and Ankle Protectors

Robert Gleason Jr., 42, was pronounced dead by authorities at 9:08 p.m. January 16th, 2013 at Greensville Correctional Center. He became the first inmate executed in the United States this year and the first to choose death by electrocution since 2010. In Virginia and nine other states, death row inmates are allowed to choose between electrocution and lethal injection.

Pictured here with some serious restraints including Ripp Tubes secured with a disposable restraint, black box, and Smith & Wesson Model 1840 Restraint Belt. All items are available at Handcuff Warehouse.

Hiatt Handcuffs in England was acquired by American company Armor Holdings in 2006. Armor Holdings was then acquired by British company BAE Systems. The Hiatt factory in Birmingham, England was closed in late June, 2008. BAE moved the Hiatt factory to New Hampshire and began making the Hiatt handcuff line under the Safariland brand. In 2010, they closed the New Hampshire factory and now they are made in Ontario, CA. All restraints made by BAE companies were placed under the Safariland brand. This includes Monadnock disposable restraints and NIK Flex-Cufs, Tranzport Hoods, and Spit Nets. In 2012 Safariland was acquired in a private equity deal led by the former CEO of Armor Holdings, Warren Kanders. Kanders is the Chairman and CEO of the new company which will continue to be named Safariland.

All Safariland restraints will placed under the Monadnock umbrella beginning 2013. Safariland handcuffs will be branded Hiatt again. The old Monadnock double cuffs and spare cuffs that were switched to Safariland will be Monadnock again. And the old NIK Flex-Cufs, Tranzport Hoods, and Spit Nets that became Safariland will also be under Monadnock. Production will be moved from Ontario, CA to Pittsfield, MA sometime in 2013. We are currently not sure when we will receive our first shipment of the new Hiatt items.

Here is the special Christmas tree in our store.