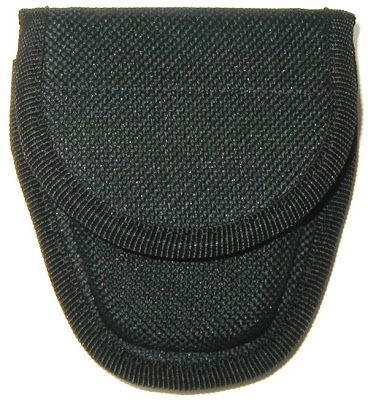 The Chicago Model CHN100 Handcuff Case is made of molded ballistic nylon with velcro closure. Comparable to the Bianchi Model 7300 size 2, this case is the best value on the market priced at only $5.99. Fits standard duty belts to 2 1/4″. Excellent quality. It will hold and standard chain or hinged handcuffs, including Peerless Model 801 hinged and Hiatt and Safariland oversized chain and hinged handcuffs. 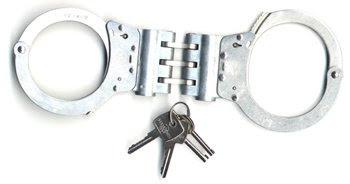 We still have a few Hiatt HSS9 high security handcuffs left. The Hiatt brand has been discontinued and this model will probably not be made by Safariland. Here is the description from our website: Nickel finish hinged maximum security model features a pick resistant wafer lock. When double locked, this is one of the most difficult restraints to pick in the world. They have a lever lock that uses a standard barrel key and a wafer lock that requires a separate special key. Each set can only be opened by the matching key. Other HSS9 keys will not open it unless keyed specifically to that lock. 25 locking positions and a shackle diameter ranging from 5 3/4 inches to 9 1/4 inches. Includes 2 standard keys and 2 special keys. Weigh 13.5 oz. 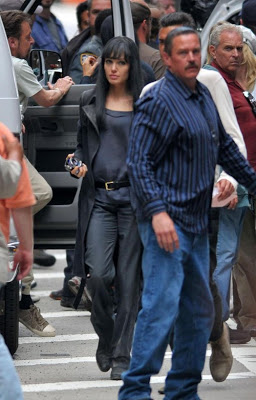 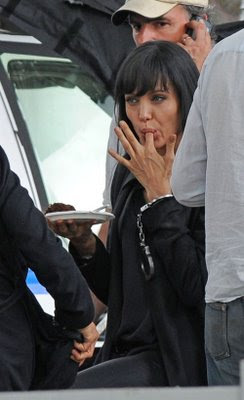 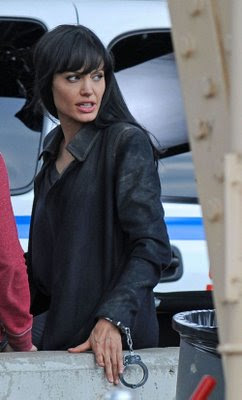 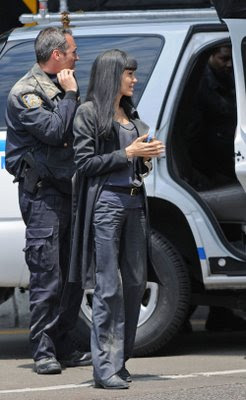 Here are some more photos of Angelina Jolie in handcuffs while filming the new movie Salt in New York. Photos were taken May 23, 2009 and she is wearing a pair of Smith & Wesson Extended Link Handcuffs. They have 4 links instead of 2. The long chain is useful for people who have a hard time holding their hands together behind their back. Hollywood often prefers long chain handcuffs because they look better on camera. Available at Handcuff Warehouse: Smith & Wesson Model 100EL Extra Link Handcuffs 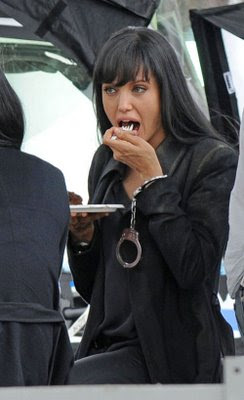 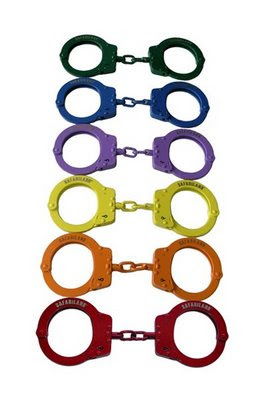 Our first shipment of the new Safariland colored handcuffs just arrived. They are almost identical to the discontinued Hiatt 2010 that they replaced. They are available in green, blue purple, yellow, orange, and red. 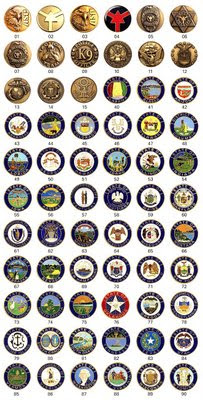 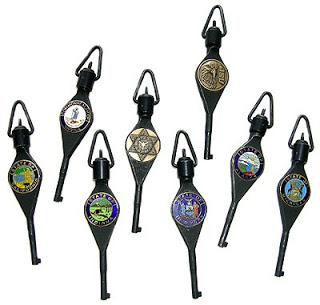 ASP swivel handcuff key with Logo of your choice. We stock handcuff keys with 66 different insignias including full color seals of each state. ASP is redesigning their logo keys, but we still have most states in stock. What are the most popular keys? Two logos outsell all others by a wide margin. Can you guess which ones?

Texas and Marine Corps seem to have as much spirit as the rest of the USA combined. My home state of California…I don’t think we’ve ever sold one. That may have something to do with why I live in Virginia now. 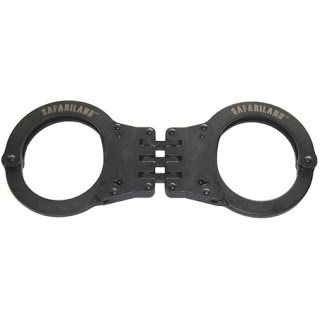 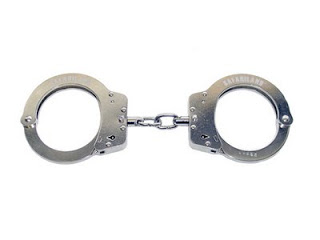 The popular Hiatt Model 2010 handcuffs have been replaced by the new Safariland Model 8112131. This was Hiatt’s standard chain nickel handcuff and by far their biggest seller. Formerly made in Birmingham, England, they are now made in Fitzwilliam, New Hampshire. I think Safariland should have chosen an easier numbering system. Model 8112131 doesn’t exactly roll off the tongue, but they are good handcuffs and have the same special Hiatt features including backloading and 3 retaining bar pawl system. Heavy-duty construction with oversized rivet heads for added strength and side double locks; with two keys. Feature reinforced steel swivels for extra strength and durability. 23 locking positions, shackle diameter from 5 1/4 inches to 8 1/4 inches.

We have large quantities in stock now at Handcuff Warehouse: Safariland Model 8112131 (Hiatt 2010)

Peerless Model 801T hinged training handcuffs have permanently attached low profile steel dials which open the cuffs quickly for efficient training. The face of the dial provides an illustration indicating the direction to turn to open the cuff. Additionally, the double lock feature of the cuffs is fully functional. 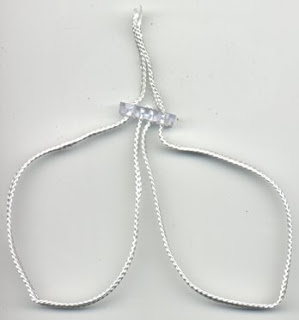 We recommend Tuff-Tie disposable restraints for all airlines. They are lightweight, compact, and do not deteriorate over time. We helped United Airlines choose Tuff-Tie and they keep them on all of their planes. The story below is a good example of why all commercial planes should carry Tuff-Ties.
Available at Handcuff Warehouse: Tuff-Tie Restraints
Soap drinking, leg biting, handcuffs: Another wild flight on United

Apparently woozy from a combination of pills, alcohol and lavatory hand soap, passenger allegedly tried to bite a flight attendant in the leg.
By Julie Johnsson Tribune staff reporter
5:44 PM CDT, May 5, 2009

United Airlines diverted a flight bound to London after an incoherent and disruptive passenger, apparently woozy from a combination of pills, alcohol and lavatory hand soap, allegedly tried to bite a flight attendant in the leg.Galina Rusanova, a British citizen, was charged with interference with a flight crew and assault for disrupting United flight 934 from Los Angeles to London Heathrow Airport on April 29, forcing the plane to land in Maine. She could face up to 20 years in prison and a $250,000 fine.In a Monday hearing before a U.S. District Court in Bangor, Maine, Rusanova waived her right to a detention hearing and agreed to be detained pending trial.Rusanova is described by the British press as a Russian-born artist, actress and author who rubs elbows with the rich and famous. She was returning home to the United Kingdom after traveling to California to visit a man she had met over the Internet, according to court documents.
“Obviously, it’s a case that’s gathered some attention,” said Matthew Erickson, her attorney. “What wasn’t disclosed through the affidavit is that Ms. Rusanova is a very intelligent, charming woman. This comes as a shock to her.”The outrageous behavior that Rusanova apparently exhibited during the flight is completely out of character, added Erickson. “Her mistake was to mix prescription drugs with alcohol. After that, all bets were off.”Drunken and unruly passengers have been an unpleasant fact of life for flight attendants for as long as airlines have served alcohol. But today’s crews are better equipped to deal with poor behavior than their predecessors, and far less likely to tolerate it, said aviation consultant Robert Mann.Airline crews are equipped with tools like plastic handcuffs to restrain out-of-control passengers and trained to quickly land a plane if that person becomes violent.”Whenever there’s an incident that involves physical abuse or threats to anyone on board, it’s taken very seriously,” said Robin Urbanski, spokeswoman for Chicago-based United. She added that such incidents are rare.Fearful of flying, Rusanova had taken four sleeping pills and consumed two or three bottles of red wine to calm her nerves, according to a statement she made to FBI special agent James McCarty.About three hours into the flight, a United flight attendant said she found Rusanova with her feet on her in-flight food tray, kicking the seat in front of her. Rusanova, who appeared to be very intoxicated according to a court filing, requested more wine and then fell asleep.A short time later, the same United crew member was told by passengers that Rusanova was incoherent and bothering fellow travelers.As she approached, she saw Rusanova “drink a bottle of liquid soap that she had apparently removed from the bathroom,” according to the court document.A melee ensued as flight attendants tried to subdue Rusanova and move her to a flight crew member’s seat at the rear of the cabin, where she was eventually handcuffed.During that process Rusanova allegedly threw punches, kicked and pushed crew members. At one point, she fell to the floor of the galley in the rear of the aircraft and began “snapping like a dog,” trying to bite a flight attendant’s leg, according to the filing.Rusanova told McCarty, the FBI agent, that she remembered little about the flight, aside from fighting with a flight attendant over seating and the quality of United’s red wine.”She added that what she did was terrible and she feels embarrassed,” McCarty said in an affidavit to the court. While Rusanova potentially faces a lengthy incarceration, sentencing guidelines for cases like hers suggest jail terms ranging from time served to six months, Erickson said. 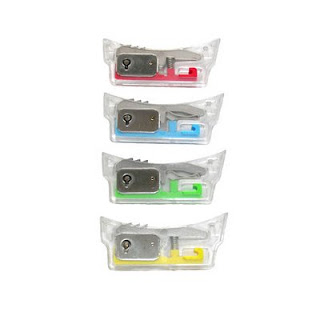 ASP replacement lock sets allow you to replace damaged ASP locks or convert your current handcuffs. ASP lock sets are easily removable and are interchangeable with chain, hinged, or rigid ASP handcuffs. You can convert standard handcuffs into high security or training, etc. The lock sets are color coded for easy identification. Standard 1 pawl locks are yellow (55212). High security locks that require a special key are blue (55213). 3 pawl European lock sets are green (55214). Training slip pawl lock sets that do not require a key are red (55215).