I just got back from the SHOT Show in Orlando.

ASP is supposed to release their rigid handcuffs by early February. They have been anticipated for several years. I had heard that it took a lot of work to perfect the locking center hinge. I examined some and think they did a good job. They are also coming out with red training handcuffs. They will be available in chain, hinged, and rigid. They do not have dials like the Zak training handcuffs. They can just be pulled open. There is enough tension from contact with the pawl to hold the bow in place. Their new logo keys are still in the works and won’t be available for a few more months.

Hiatt-Thompson has redesigned their blue box to accomodate ASP chain handcuffs. The new blue box is a little wider. They have developed a 5 tooth pawl and will incorporate the new design into their entire product line. They are also developing a new high security handcuff.

Smith & Wesson’s long anticipated lever lock handcuffs are supposed to ship in the next few weeks. I played with some and think it is a great design. It is a little different from the first prototype I saw 3 years ago. You pull the lever away from center of the cuff and the lever springs back into place after activating the double lock pin It takes a good amount of force to activate and the lever is low profile, so I think accidental activation of the double lock is unlikely. The lever locks will be available in nickel and Melonite. We currently have their new colored Weather Shield handcuffs in pink and yellow. The additional colors will be red, blue, green and desert. The S&W literature says this about the coating: “An advanced, tough as nails, corrosion protection system. The system, when applied to the critical metal parts makes the restraint nearly impervious to rust.”

Peerless has recently released their new line of colored handcuffs. The cuffs look great and they will be offering all of their products in colors. We currently have all colors in stock except yellow which is supposed to be released in February.

Zak Tool is moving toward more use of polymer keys as they are lighter and less expensive to manufacture than steel. Only the body is polymer, the actual key part is always stainless steel. We are aso working with them on a couple new products.

I asked around about Gotcha Handcuffs by Taper International. I already knew they were dead in the water, but it was confirmed that they haven’t made any handcuffs in over a year and there are no current plans to resume production. They are a good design…maybe they will be able to sell the company. 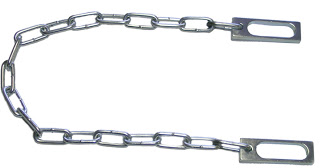